As we had discussed about the types of motive waves, so we can move forward to know about the corrective waves as the combination of both will form a complete cycle.

The waves which move against the larger trend are corrective waves. Corrections can be of two types – sharp and sideways. Sharp corrections are steep moves in opposite direction of larger trend while sideways correction is a range bound trade which retraces a particular percentage and trades between the termination point of motive wave and retracement levels thus giving the look of sideways correction.

There are specific corrective patterns which Elliot had come across:

Zigzags are 3 wave structures which sub-divide into 5-3-5. This further appears as single, double and triple zigzag.

Single zigzag is a 3 wave structure sub-dividing into 5-3-5 namely A-B-C.

Double zigzag is also a 3 wave structure but wave X correction extends this zigzag into double zigzag i.e A-B-C-X-A-B-C where first A-B-C is W and second A-B-C is Y wave.

Triple zigzag is interrupted by X wave 2 times thus giving the formation of W-X-Y-XX-Z where W, Y and Z are zigzags in itself. 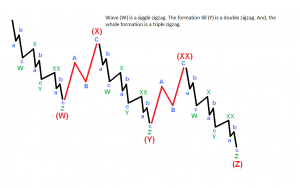 Flats are a 3 wave corrective pattern which sub-divides into 3-3-5 structure. Flats can be of 3 types – regular, expanding and running.

Regular flat is a 3-wave formation where wave B doesn’t surpass the starting level of wave A and Wave C ends below wave A.

In expanding flat, wave B crosses the beginning of wave A and wave C also crosses the termination point of wave A. This is also known as irregular flat but it appears more in real life scenarios.

In running flat, wave B crosses the beginning of wave A but wave C could not cross the termination level of wave A and ends within the boundary of wave A. 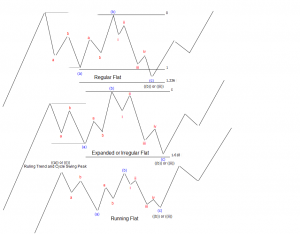 Triangles consists of five overlapping waves A, B, C, D & E which sub-divides into 3-3-3-3-3, thus giving the look of a sideways move. A triangle is formed by connecting the termination points of 2 waves from each side. Wave A & C on one side and wave B & D connects from the other side to form a triangle.

Triangles are of 3 types – contracting, barrier (ascending or descending) and expanding. The shapes of triangles itself simply explain their types. 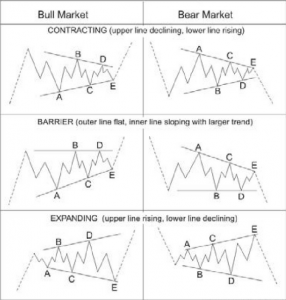 With these figures and explanations, one must have become a bit familiar with corrections. The understanding of these basics is must to understand at which position the price chart is. Our next article will make Elliot wave much more clear. The complete knowledge and remembering these basics will have edge over others.