In the above complete cycle wave (1) is motive wave of lower degree in larger degree wave [1]. The same way wave [B] itself is formed of a-b-c corrective pattern of lower degree. It can also be said as correction within corrective.

From the above figure it is also clear that motive waves are not necessarily be moving upwards but can be a down move also – wave [A] & [C] are motive waves (formed of 5-wave structure). The same way corrective can also move up which is displayed by wave [B].

In the above figure we used different way of marking wave 1 i.e. wave (1) & [1]. This generally is done so that we may know that which is the larger degree & which is lower degree wave. Elliot described the notations & nomenclature for the degrees which he explains from largest to smallest – Grand Supercycle, Supercycle, Cycle, Primary, Intermediate, Minor, Minute, Minuette, Subminuette. 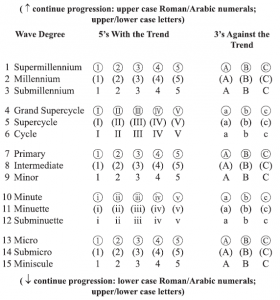 Another Aspect of Elliot Wave